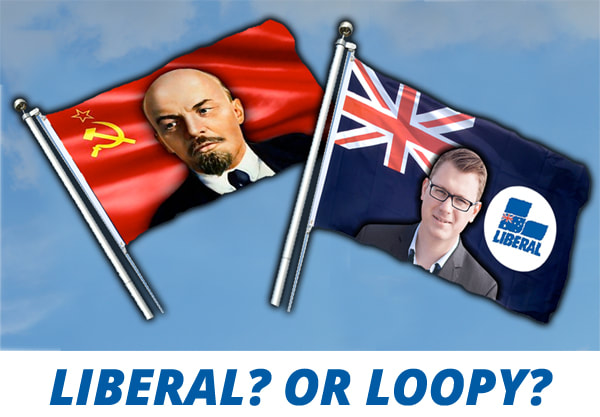 Can you spot the difference in political philosophy?
Efforts by John Geber to understand the thinking of his Local MP and Liberal Member for Schubert Stephan Knoll led to an altercation on Tuesday September 1, when John, as a newly paid-up Member of the Liberal Party, sought and gained approval to attend the Liberal Party’s Schubert State Electoral Committee meeting as an ‘observer’.

But when John showed up at the meeting - despite approval to do so from the State Liberal Party’s Membership Manager - he was confronted at the door by ‘security-like’ thugs who told him, quote: “Piss off!”

John’s frustration at this was palpable, adding further frustration to his plans to reinstate the Barossa Wine Train and his further plans to add considerably to the Barossa’s tourist offerings with an international cooking school and 100-room 5-star hotel alongside his already well-renowned Chateau Tanunda, one of the jewels in the Barossa Valley’s tourism crown.

John understood the rules of attending the meeting as an ‘observer’ in that he was not able to contribute verbally to the meeting’s proceedings - but as a Member of his Liberal Branch, wanted to understand the issues confronting his Branch, given the issues which have seen his Local Member effectively sidelined and demoted within the Liberal Parliamentary team.

As a long-time supporter of the Liberal Party in NSW - and who is on first-name terms with some of the Party’s best-known Federal and interstate Ministers - he wanted to understand the thought processes of his Local Branch - only to be denied entry to an important local Party meeting.

John says this experience only went to underline his disappointment in the Local Member - and underscores his belief that Stephan Knoll (and perhaps the current State Liberal Government) - will be removed from office at the 2021 State Election.

“That I was denied entry to the local Branch meeting is akin to the worst of censorship perpetuated under socialist regimes in Eastern Europe and only goes to reinforce the fact that as a major contributor to the Barossa community - and as a humble voter - I have been disenfranchised, a fact reinforced by the ‘goons’ who denied me entry to the meeting on September 1,” John said.

This outrage was picked up the following morning by ABC 891’s Morning host, David Bevan, who interviewed John on-air (the audio of that interview is accessible below, and makes for interesting listening).

But, is there still is a vestige of Democracy left in the SA Liberal Party?

If John had done this under Stalin’s Russia, he would have been taken out and shot - and while the thugs at the Schubert Committee meeting would perhaps have liked to have done the same, the last scrap of ‘freedom of expression’ that may exist amongst the local Liberal oligarchy succumbed to better sense....
CLICK HERE to return to our 'Latest news' page

or CLICK HERE to return to our 'Home' page